Aftercharge is a competitive 3v3 first-person online game that pits invisible robots against a squad of specialized security enforcers in quick-paced skirmishes. The robots must sabotage the energy extractors scattered on the map while the enforcers are tasked to spot them and stop them.

Aftercharge is an asymmetrical team game as the two teams not only have different objectives and different abilities but also offer wildly different play styles. One team is made of permanently invisible melee robots and their objective is to destroy all six extractors dispersed around the map. At any time, they can transfer power charges between one another either to empower each other or to boost an ally back to life. They must coordinate their attacks, create distractions and combine their abilities to lay waste on the extractors. The other team are the enforcers, they are class-based and their arsenal each contains a main weapon, a sub-weapon and a special ability. Their goal is to successfully deactivate all three robots simultaneously. They use up energy for their main weapons and abilities and they must stand close an extractor to recharge their energy, making these neutral structures a key resource for both teams.

Decades ago, the energy company Aftercharge corp. commissioned a settlement on the distant planet Dusk 11 to exploit the unhinged source of Quanta energy residing at its core. To build the automated extractors, the company created a line of worker robots called workonics with the unique ability to go stealth to avoid corporate espionage. Once the construction was complete, Aftercharge corp. left the planet entirely leaving their discarded workonics behind. With the Quanta now approaching depletion, the core of Dusk 11 is more unstable than ever before. Subterranean seismical activity triggered the release of a powerful charge of Quanta which reanimated all the workonics on the surface. The worker robots are now back online with one goal in mind, wrecking the extractors siphoning the planet. Catching word of this robotic mutiny, Aftercharge corp. is sending its special enforcer squad to thwart the uprising and protect their precious installations.

Aftercharge is Chainsawesome Games’ third title. It was born from a prototype that earned the studio an honor in the professional category of the Pixel Challenge 48-hour Game Jam in 2015. The first version of the game called Electric Panic was played in a top-down perspective much in the likes of the studio’s second title, Knight Squad. Wanting to step it up a notch and create a game with high competitive potential, the team kept the core gameplay, changed the view to first-person, secured funding and set course to create a much more ambitious project. 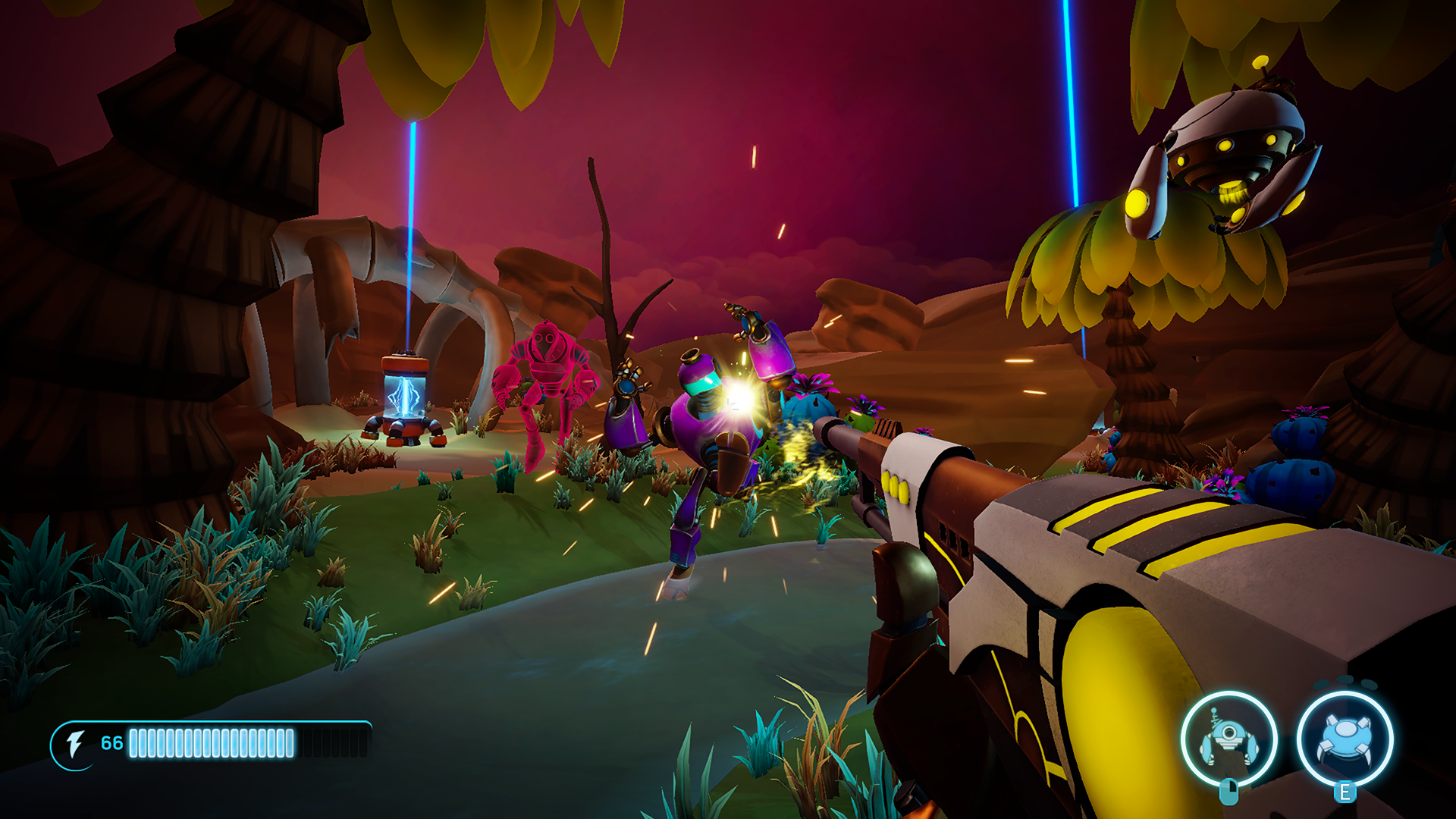 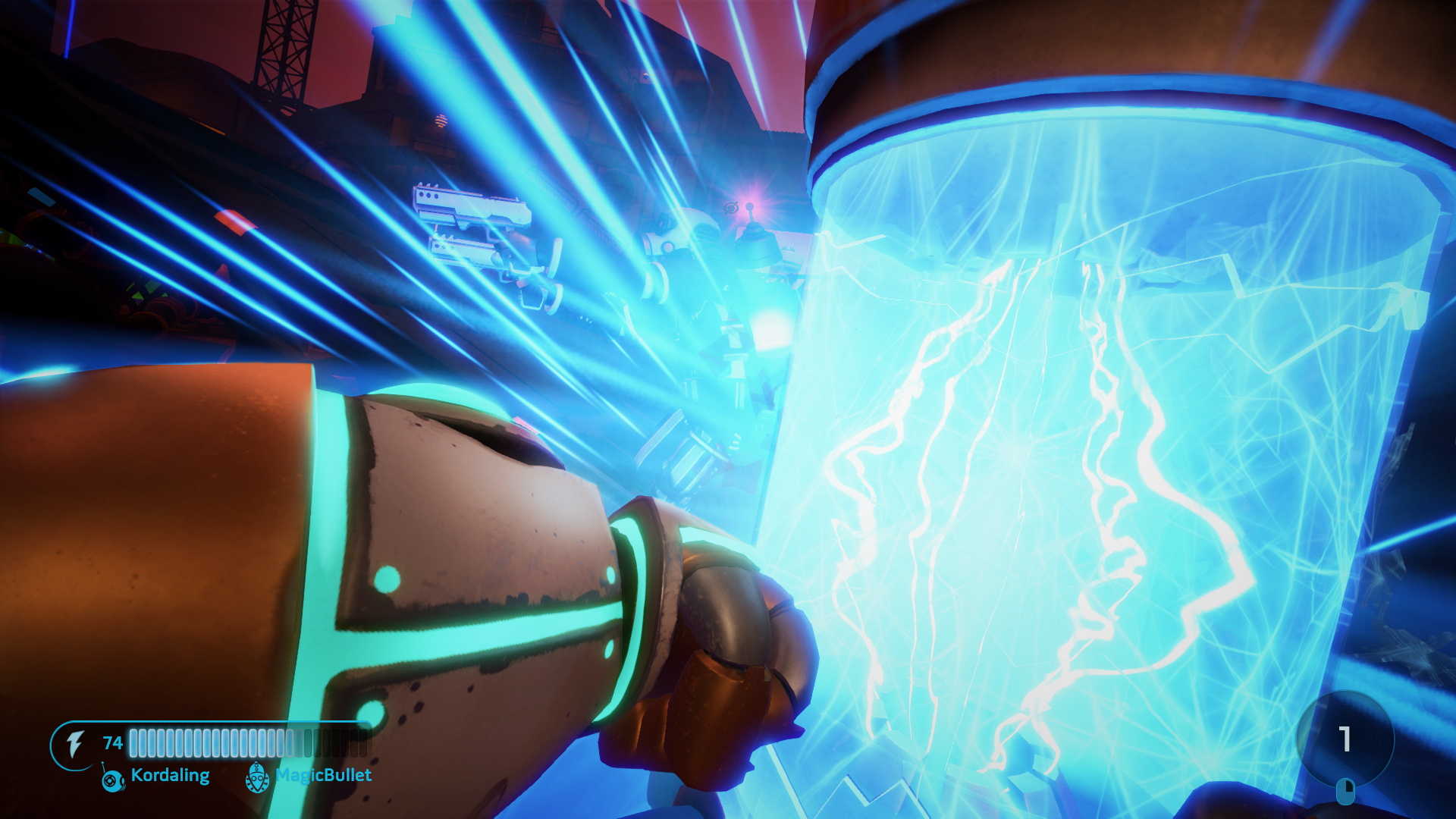 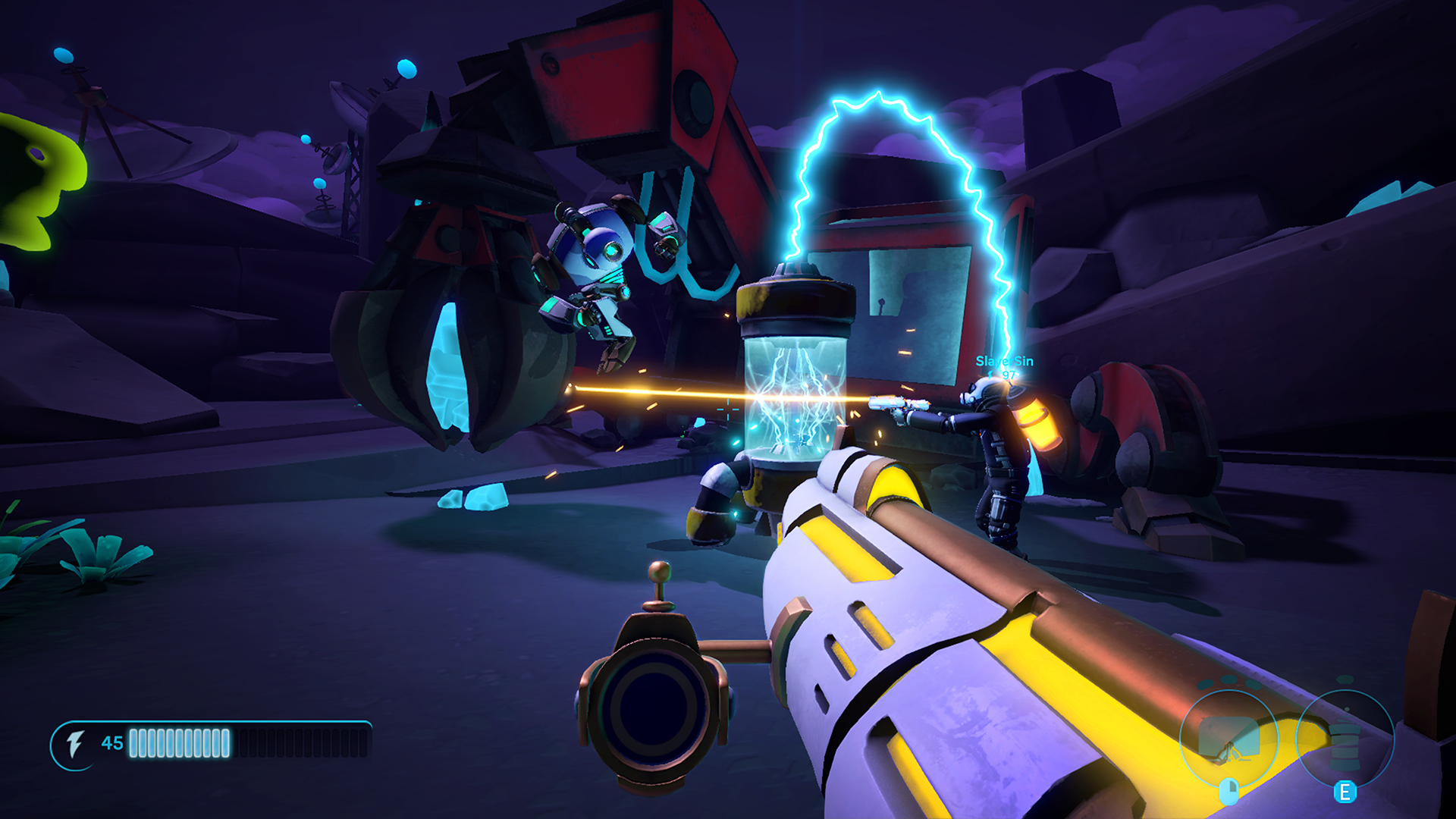 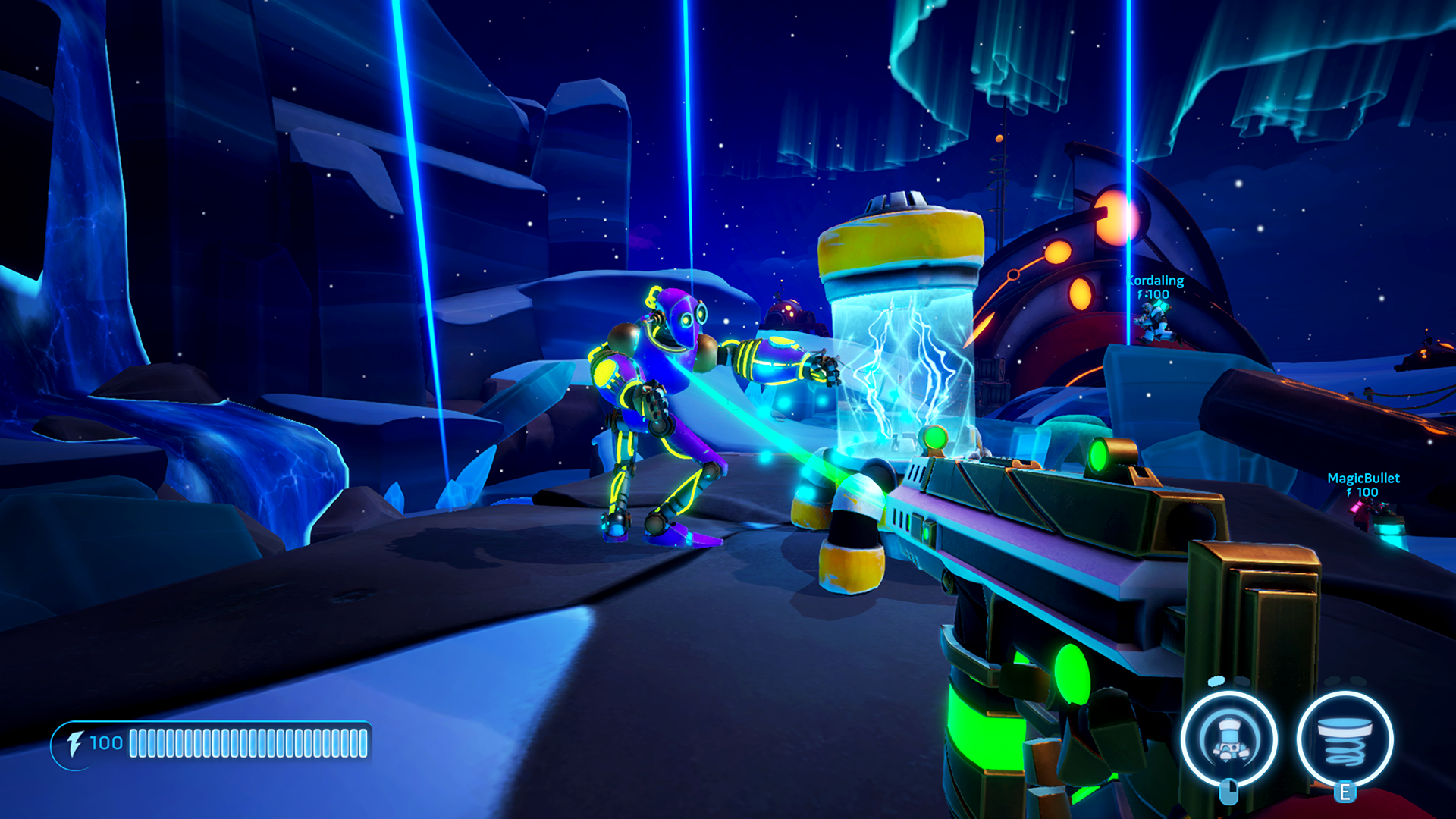 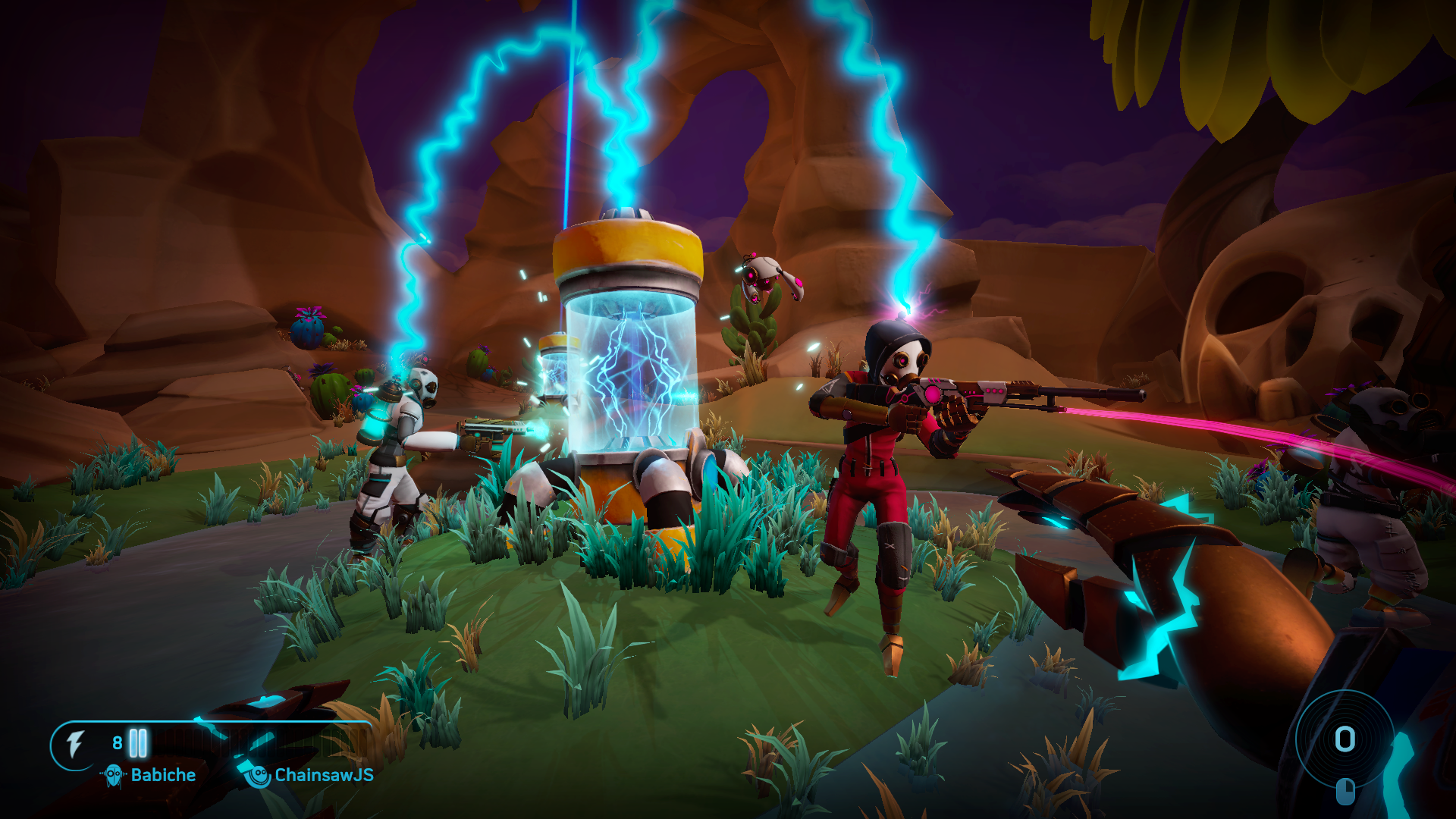 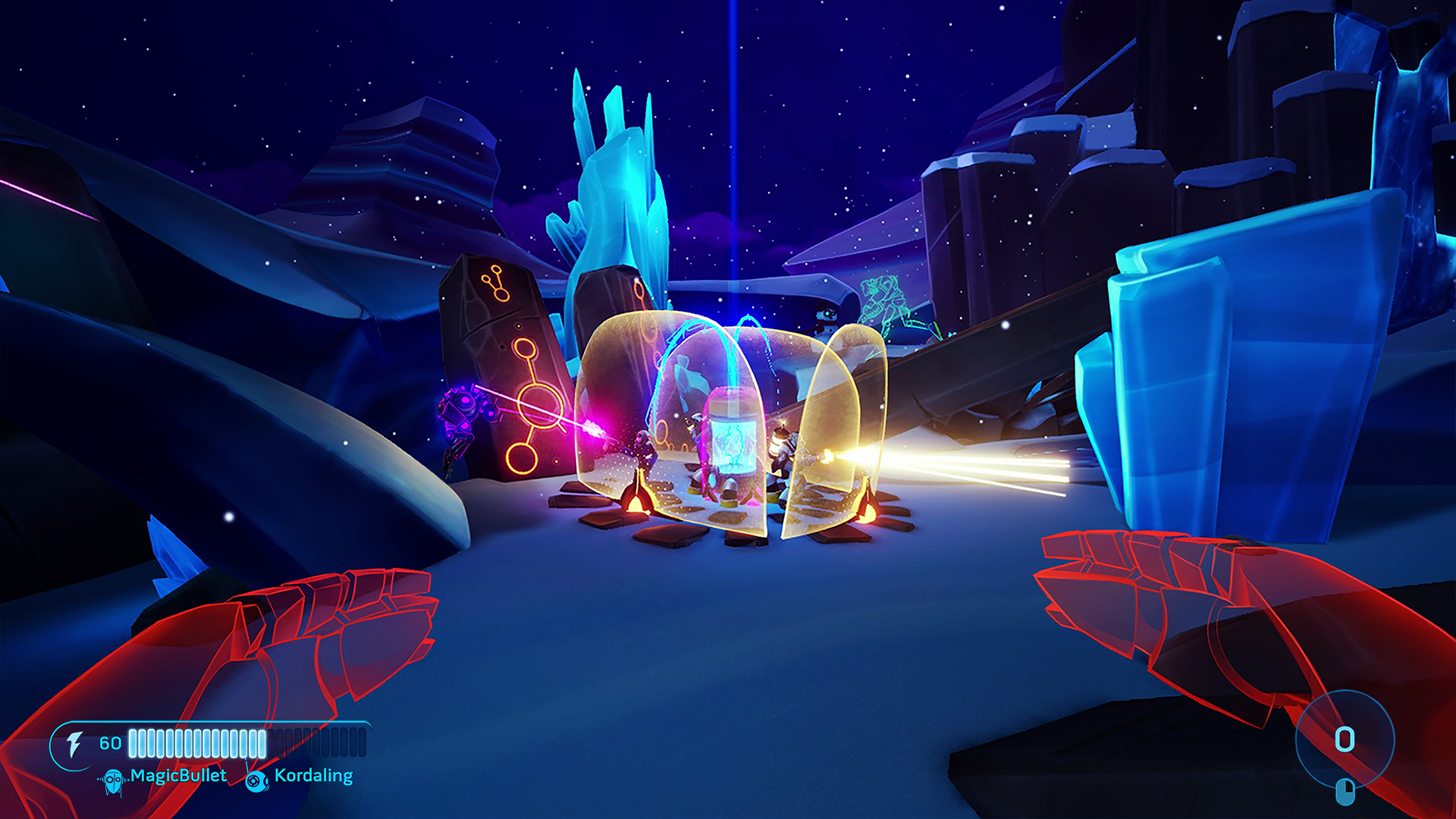 We are afraid this developer has not upgraded their presskit() to use distribute(). For security purposes, this form has been disabled.

Chainsawesome Games is a small studio composed of 6 chainsaw lovers that like to create mechanically fun multiplayer games for PC and Consoles. Up to now, they have released and self-published 3 games, Beatblasters III, Knight Squad and Aftercharge. They are based in Quebec City where poutine is actually good and winters last entire generations.

presskit() by Rami Ismail (Vlambeer) - also thanks to these fine folks